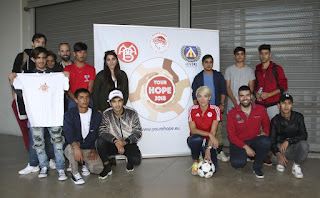 The implementation of the main stage of the "You're Hope" project was carried out with great success at the sports facilities of the Martial Arts department.  Olympiacos organized a multisport event for young refugees in order to engage with sport and promote their social integration in the local community of Piraeus. The young refugees had the opportunity to practice a wide range of sports under the guidance of Olympiacos coaches while the attendees were informed about the action and its expected impact on society.

The club proved its leading role in the project as well as its sensitivity to the refugee crisis. Since 2015, Olympiacos supports the people who are in need by helping thousands of refugees who fled their homes to save their lives and found a temporary shelter at Piraeus port. Also, it has organized many football matches for refugees with the participation of veteran football stars such as Karembeu. All of these initiatives prove that charity and contribution are deeply rooted in the club’s DNA.

The event was also attended by a delegation of UNESCO in southeast Attica - headed by the President of sports and educational issues, Mr. A. Glykas - which helped the Olympiacos initiative. For this action, it is worth noting that the club collaborated with the NGO ‘’ARSIS’’, which secured the participation of the young refugees hosted in the safe zone of Sxisto.
Posted by You're Hope at 21:19