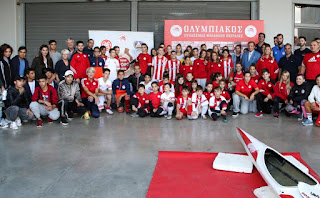 Olympiacos participated in the European action ‘’#BeActive’’ as a part of the European Week of Sport (23-30 September) for the fourth consecutive year.
The club organized an impressive multisport event in the surrounding area of the Martial Arts at the Stadium ‘’G. Karaiskakis’’ with the participation of the Academies of Martial Arts, volleyball, athletics, table tennis, rowing and kayaking. A special mention should be made to the participation of the Academy of the football department which supported this initiative actively.

During the event, the athletes of the Academies had the opportunity to entertain and practice different sports, discovering new talents and skills under the guidance of their coaches. The Olympiacos staff has given many surprises to the young athletes, encouraging their parents to participate actively in order to take a quick look at the greatness of the club and the important work done at the Academies. All participants enjoyed the event, anticipating the organization of similar activities in the future.

At the end of the event, diplomas were awarded to all participants by the Olympiacos General Secretary, Christina Tsiligkiri who stated: ''Olympiacos is used to having a leading role not only in all sports in both national and international competitions but also in non-sport issues. Our club participates in the European week of sports and the action “#BeActive’’ for the fourth consecutive year and organizing actions like this, we pursue to spread this message that urges people to choose a sport activity and integrate it into their daily life. As club, we were represented by the Academies of Martial Arts, volleyball, track and field, table-tennis, rowing, kayaking and the football. Apart from the ‘’#BeActive’’, Olympiacos is the main coordinator of the European project ‘’You're Hope’’ and organized another event for refugees. The aim of this project is the social integration of refugees through sport and Olympiacos is sensitized to such actions, through which our social profile is expressed.''
Posted by You're Hope at 21:22